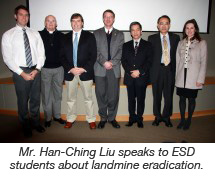 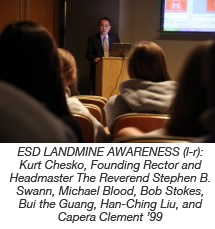 The visit to Dallas and ESD was in conjunction with HDI’s Mine Action Awareness Tour. United Nation Ambassadors, diplomats from mine-affected countries, and non-governmental organizations focused on mine action are working together to educate academic institutions on the steps being taken by the United States and the international community to eliminate landmines. This life-saving program is made possible through a grant from the Office of Weapons Removal and Abatement, the U.S. Department of State, and the Bureau of Political-Military Affairs and was initiated in Seattle, Washington in November 2009. This trip marks their second to Dallas.

Head of Upper School, Erin Mayo said of the event, “Not only did about 50 freshman and sophomore history students gain uncommon, firsthand insight into the lingering effects of war in a region that they study, but they also witnessed an ESD alumna's commitment to global service. I'm so glad that Capera included us on her panel's tour of Dallas.”

About the Episcopal School of DallasThe Episcopal School of Dallas is an academic community whose mission is to prepare young men and women for lives of intellectual discovery, integrity, and purpose. The School develops the unique talent and potential in each student and embraces sound learning, discipline, and faith as essential elements of an educated conscience. Approximately 1,150 students attend ESD aged Beginner (age 3) to 12th grade, with 377 students in the Upper School (9th – 12th grade).