Officials from around the world are impressed by the university’s culture and diversity during an eventful visit to campus.

A distinguished delegation from the United Nations that included ambassadors, counselors and top officials from seven countries visited USC June 23 as part of an effort to have the diplomats experience America beyond the confines of New York City.

The group members had breakfast in the Intellectual Commons of Doheny Library, where they were hosted by Peter Mancall, associate vice provost for research advancement. 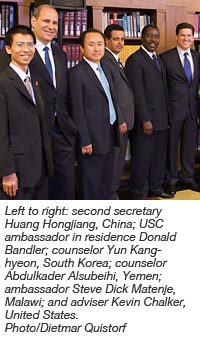 The diplomats then gave brief presentations and took questions from a large group of students, faculty and staff that filled the Los Angeles Times Room on Doheny’s first floor.

Accompanying them was adviser Kevin Chalker of the United States delegation, Silva Bonacito of the U.N. secretariat office of the secretary general and Ralph Cwerman, president of the Humpty Dumpty Institute based in New York City. Donald Bandler, USC ambassador in residence and a Provost’s Distinguished Visitor, hosted the group for the question and answer session.

The Humpty Dumpty Institute (“funny name, serious mission”) regularly sponsors trips for U.N. diplomats across the United States so they can experience the nation’s diversity and cultural richness. Institute president Cwerman said USC was chosen this year because of its global reach.

After the visit, Cwerman said he and the diplomats were “so impressed by the sophistication, the leadership and the globalism” at the university. “The ambassadors hardly ever see the cities outside New York, so these are important experiences,” he said.

Mancall said he was particularly impressed by the turnout of students at the Q&A session and the quality of their questions.

The first question was from a student who spent two summers in Malawi and was followed by questions from audience members who had traveled to Rwanda and done research on South Korea.

“It was a fabulous turnout, especially during the summertime,” and the questions were thoughtful, Mancall said. “It’s significant for us to give this corps of diplomats a sense of the research at USC and to have them recognize with greater depth the contributions of USC globally,” he said.

He said the ambassadors personally expressed their delight at the information they received about USC. “They said they didn’t know there was so much going on internationally here,” he said.