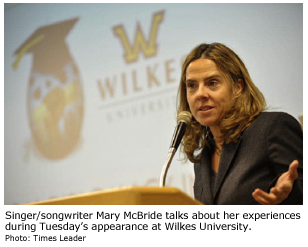 WILKES-BARRE – One of the most memorable shows singer/songwriter Mary McBride performed on her worldwide tour as a cultural ambassador for the U.S. Department of State was at a senior center in Iraq.

Those in Iraq senior centers usually have some mental or physical disability and have been abandoned by their families, McBride said.

Staffers told McBride they found one woman living in a trash dump, where her family had abandoned her.

“She had a lot of scars and a lot of issues, and I asked, ‘What is that from?’ They said she was living with rats,” McBride recalled.

After McBride began to sing, the woman started dancing. The woman also led the audience to an “Oh, yeah” shout-back part of a song. After the concert, McBride was walking to a vehicle and could hear the woman still singing.

“It was one of those moments where if you had a bad day … (you realize) that you’re making an impact,” McBride said. “I feel like it’s important to tell those stories of what music can do.”

This was one of several tales from her two-and-a-half-year tour that McBride shared with students who attended her presentation “Cultural Diplomacy in Action: A Talk with Mary McBride” on Tuesday at Wilkes University.

The exchange of values can be difficult, she said, and music can be a bridge.

The daughter of politically active and musically talented parents and grandparents, McBride said she considered a career in politics but decided on music, and has no regrets.

McBride founded The Home Tour, which travels throughout the United States and abroad to “places people call home,” including facilities such as long-term health care centers, homeless shelters, orphanages, prisons and homes for people with mental and physical disabilities.

The Washington Post sent a reporter to travel with her band and the story was noticed by the Department of State and the Humpty Dumpty Institute, a non-profit that serves people in the developing world.

McBride was invited to become a cultural ambassador. She accepted and her band performed their first tour in Russia.

“Since then, we’ve played in all of these incredible countries. We did 2½ weeks in Pakistan, which I would say was one of my favorite tours, not just because of the unbelievable food, but also the people and the number of people we played for who had never been to a live show, had never been to a club, have never even been in a room with somebody doing anything resembling a public performance,” McBride said.

Read this article at: TimesLeader.com