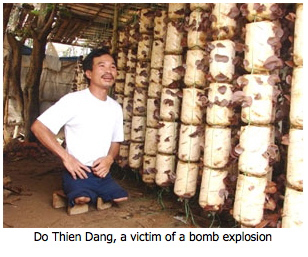 PANO – Japan will provide US$122,936 to support victims of bombs and mines in Quang Tri province.

The project was signed on August 10th at the Embassy of Japan in Hanoi, by Hideo Suzuki, Charge D’affaires of the Japanese Embassy in Vietnam and Jeanne Samuel, Director of the Humpty Dumpty Institute (HDI) in Vietnam, a US non-governmental organisation specialising in supporting mushroom-growing in Quang Tri Province.

The money funded by Japanese Government is for improving mushroom-growing capacity for local people, especially farmers, single women, ethnic minority people who are victims of bombs and mines so that they could obtain more income.

Since 2010, Humpty Dumpty Institute in association with Renew Project opened “Mushroom’s mission” program to develop mushroom growing to be a sustainable agricultural sector in Quang Tri.

The number of households participating in the project increased from nine at the beginning to 100 at present. They have been provided training courses on mushroom cultivation and new equipment to begin their own production.

“I believe that this project will help the victims improve their lives as well as strengthen the friendship and mutual understanding between Vietnam and Japan”, said Hideo Suzuki.

Quang Tri is among provinces in Vietnam with most destruction by bombs and mines. Thousands of tonnes of bombs and mines are not unearthed in this province. About 10,000 local people are victims of UXO explosions and they are still experiencing a hard life.

Read this article at: www.qdnd.vn