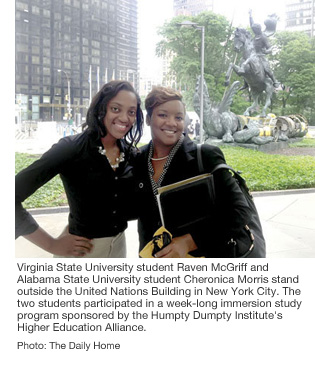 
An Alabama State University student and Talladega native recently returned from a week-long immersion study program at the United Nations in New York and Washington, D.C.

Cheronica Morris, a graduate student working toward a Masters of Accounting degree, joined three of her peers from the university to attend the first-ever Summer Intensive Session sponsored by the Humpty Dumpty Institute’s Higher Education Alliance June 9-15. A total of 30 graduate and advanced undergraduate students from around the world participated in the event.

“A lot of the students were international affairs majors or public policy majors and I was a business and accounting major, so I didn’t have any perception of the United Nations. I just knew the United Nations were a combined (group of) nations and that was my general perspective. They discussed in-depth peace-keeping missions, humanitarian efforts, things they were doing to stop human trafficking and (other initiatives) that I applaud. I enjoyed it. I really did.”

Near the end of the week, the group migrated south to Washington, D.C., where they attended meetings and briefings with senior officials at the U.S. Department of State, Congressional staff, U.N. Information Center and various non-government organizations.

“The knowledge and information I obtained at the United Nations was invaluable,” Morris said.

Not only did Morris find the seminars enriching, she considered the opportunity to meet the international members of her group from Taiwan, Brazil, Bolivia, Nigeria, Saudi Arabia, Lebanon and Haiti to be a once-in-a-lifetime experience.

“You would think that there’s a difference between us, but they act just like we do,” Morris said. “The five students from Taiwan liked the same music and same food that we do. The interaction was great. We each orchestrated meetings outside of the scheduled meetings because we all got along so well.”

Morris elaborated on the musical preferences of the group during the week-long trip.

“When we were on our own time, we’d talk about different artists,” Morris said. “They listen to Justin Timberlake, Kanye West and many other R&B artists. We even had a karaoke session where they sang some of the old blues music. We all had a really good time.”

The group established such a strong rapport with one another, Morris noted the friendships made and connections established would be maintained via social media.

“We even created a Facebook page for our experience so we could post all of our pictures because the experience was just that great,” Morris said. “You get to feed off them and learn their culture. Even the Taiwanese ambassador came and he fixed us a traditional Taiwanese meal.”

Morris stated the seminars, the lessons learned and the cultural exchange had such an impact on her, she plans to alter her intended career path to one day become an international professor.

“At first, I was looking into the corporate world,” Morris said. “But this excites me and I want to be able to teach other students about the experiences that I had. The different interests they’re partaking in I would like to incorporate into my own classroom setting.”

Read this article at: DailyHome.com