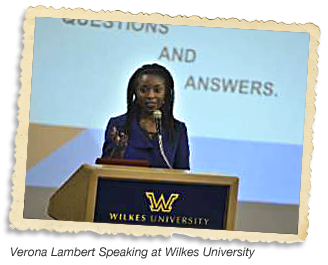 Verona Lambert, a political affairs officer of the United Nations Counter-Terrorism Implementation Task Force, spoke to Wilkes University students on Monday, January 23, 2012, in conjunction with the Humpty Dumpty Institute’s Higher Education Alliance for the United Nations (HEA), giving them insight into counter-terrorism and how that can translate into employment opportunities.

Lambert is one of six U.N. officials to hold lectures and informal meetings at the university with students organized around the theme of “Human Security in the 21st Century: Challenges and Solutions” during the 2011-2012 academic year.
“This gives students an international perspective to enrich their education with a world view,” university spokeswoman Vicki C. Mayk said.

Ellen Flint, director of Undergraduate Education Studies and associate professor of music, said the university joined the Humpty Dumpty Institute to inform the students and the community of the pressing issues they face and to let students know how to apply for positions within the U.N.

“Lambert was great, the students were really excited to learn how to apply for a position with the U.N.,” said Andrew P. Miller, an assistant professor of political science.

Lambert told the students about specific testing to gain entry to employment at the United Nations. “I think it’s good for the students to connect to a real person that is employed by the U.N. and learn that it’s possible for them too,” Miller said. The U.N. officer spoke of international issues relating to the effects of terrorism and attributing it as a cause of destabilization of societies and loss of lives.

“Terrorism is an international problem” that should not be blamed on one group or religion, Lambert said.