In Sri Lanka, Mary consulted with The Humpty Dumpty Institute's implementing partners The HALO Trust and Land o' Lakes. Discussions centered on HDI's two-year $4 million Food for Progress project in the Jaffna Peninsula to clear mines on dairy farmland and to redevelop the dairy and live stock industry in northern Sri Lanka. A very moving aspect of Mary's visit was her tour of Akarawitta Village, in the outskirts of Colombo. This village was established by the Sri Lankan government for victims of landmines and their survivors. The highlight of Mary's tour in Sri Lanka was a benefit concert on November 3 to raise money for the Association of Disabled Ex-Service Personnel (ADEP) and Jaffna Jaipur Centre for Disability Rehabilitation. 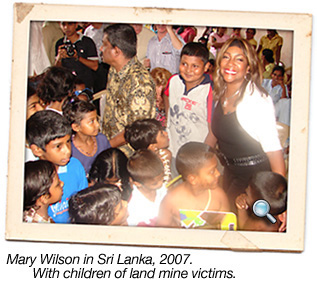 Mary brought her seven member band from the United States with the support of the Cinnamon Grand Hotel in Colombo, Sri Lanka and completely won over the 300 person VIP audience. Her 90-minute set of Supremes songs, rock and roll, and ballads had diplomats, government officials, and the news media up and dancing. Mary was joined in Sri Lanka by Nauman Khan Lasharie from Pakistan. Mary had identified Nauman Khan as the most promising young performer she met during her 2004 visit to Islamabad as a U.S. Cultural Ambassador and has served as his mentor. Nauman credits her support and encouragement for leading to the successful launch of his first video entitled Tere Chehre Pe, featuring the Bollywood star Anita Hassanandani, also known as Natassha. 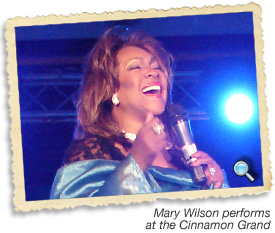 Mary and the rest of the The Humpty Dumpty Institute delegation arrived in Vientiane, Laos on November 5. To this day, Laos still holds the sad record of being the most bombed country in the world. In early 2006, The Humpty Dumpty Institute received a $2.93 million Food for Education grant from the U.S. Department of Agriculture (USDA) to improve basic education and address Laotian unexploded ordnance (UXO) as a barrier to school attendance. Our partners on this project are Mines Advisory Group (MAG) and International Relief & Development (IRD). This is the first USDA Food for Education grant in Laos, and it is also the first initiative in Laos to explicitly link UXO clearance with increased school attendance through school feeding.

The delegation visited Khammouane province where Mary personally saw how this Humpty Dumpty Institute program is benefiting over 11,900 children in 110 villages. Mary visited several of these villages and saw all aspects of the school feeding programs and UXO disposal project. In Phonsavanh Village, Mary helped the women prepare a soybean and corn meal mix which would be used as a mid morning snack to keep the children alert. In the village of Phonsead everyone ate with the children and heard first hand from them how The Humpty Dumpty Institute's UXO clearance program has allowed them to return safely to school. Finally, in Muangkhai Village Mary observed how MAG had found over 2 tonnes of explosives on grounds adjoining the school.

Mary then went to an open range and pressed the button which detonated the explosives. The entire delegation felt the shockwave of the explosion and realized the destruction these bombs cause on innocent lives. Mary Wilson also saw how The Humpty Dumpty Institute's program has resulted in greater enrollment and attendance at local schools, especially by girls; healthier children and families; and improved literacy and educational achievement.

If you would like to assist Mary Wilson and The Humpty Dumpty Institute in the fight against landmines and UXOs, please make a small donation.

back to top
< Music Matters